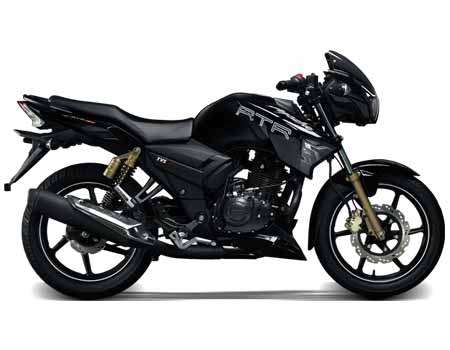 Over the last two decades, the TVS motor company started rapidly losing its market share owing to tough competition from the Hero and Honda in the commuter motorcycle segment. Moreover, thanks to the success of Bajaj Pulsar, Indian motorcyclists were now eager to get their hands on relatively powerful machines.

TVS Apache has been awarded as Performance Bike of the Year in 2008.

This urge was sensed by the folks at TVS, who introduced their performance oriented series of bikes, named the Apache, back in the year 2007. Presently, the Apache series has three products under its umbrella – Apache RTR 160, Apache RTR 180, and Apache RTR 180 ABS.

The features of TVS Apache RTR 200 Fi E100 have been listed below:

The specifications of TVS Apache RTR 200 Fi E100 have been listed below:

Note - For more information on the prices, please visit the website of the manufacturer.

Other Models Manufactured by TVS

There are no versions of the moped available. It has 70 cc engine, petrol as fuel and automatic transmission.

There are 2 versions of this motorcycle with each having 2 start options. It has 2 engine, 1 transmission, 1 fuel option and different ex-showroom price.

There are 3 versions of this scooter with 2 engine, 1 transmission, 1 fuel option and different ex-showroom price.

There are no versions of the motorcycle available. It has 110 cc engine, petrol as fuel and manual transmission.

There are no versions of the motorcycle available. It has 109 cc engine, petrol as fuel and automatic transmission.

There are 2 variants of this motorcycle with 125 cc engine, manual transmission, petrol as fuel and different braking mechanisms.

There are 2 variants of this scooter with 110 cc engine, automatic transmission, petrol as fuel and different braking mechanisms.

Why is it Important to Insure your TVS Apache

Essentials about for TVS Apache Insurance

How to buy/renew insurance for TVS Apache?

You can buy or renew two wheeler insurance for your TVS Apache through the website of Coverfox.com. Compare the different policies available and then shortlist your options on the basis of which plan fits your needs the best. Submit the basic details of your two-wheeler, like make, model, registration number, manufacturer, and then select the premium amount. Next, submit your KYC details, such as your personal details and communication address. Post submission, you will be directed to the payment page, where you can pay your premiums and purchase the policy. You can also request a call back by submitting your telephone number on Coverfox’s website and schedule an appointment with an agent.

Coverfox Advantage
Expert Advice
Expert advice and an informed, unbiased opinion that clears the confusion and helps you buy that perfect plan for you. Can it get any easier?

POST-SALES ASSISTANCE
Service Managers who assist you with all your post-sale requirements - from claims processing to renewals! They are like superheroes, but only better.

TVS Apache is a flagship two-wheeler of TVS Motor Company. It boasts of sporty looks and offers an exceptional on-road performance. The manufacturer is reportedly the first to introduce twin channel ABS on Apache RTR 180 in the country’s two-wheeler vehicle segment.

What is the Ex-Showroom price of TVS Apache in Mumbai and Delhi?

The prices of TVS Apache in these cities are:

What is the fuel capacity of this vehicle?

The fuel capacity of TVS Apache is 12.5 litres.

What are the available models of TVS Apache?

What is the engine type in TVS Apache?

What is the ground clearance of TVS Apache?

The ground clearance of TVS Apache is 165 mm.

What is the type of tyre used in TVS Apache?

What is the mileage of TVS Apache?

The mileage of TVS Apache is 60 kmpl.

What is the top speed of TVS Apache?

The max speed of TVS Apache is 110 kmph.

How to insure or renew the insurance of TVS Apache?

You can simply visit the official website of Coverfox.com and compare the right plan. Once selected, you need to submit the basic details of your vehicle such as the make, model, registration number, manufacturer, and the manufacturing date and then select the premium amount. Next, you will be required to submit your KYC details such as personal details and communication address. Post submission, you will be directed to the payments page where you can purchase the policy via internet banking. Also, you can request a call back by submitting your telephone number on the website and scheduling an appointment with an agent.

What is the revised penalty of driving on Indian roads without insurance?

The revised penalty for driving on Indian roads without insurance is Rs. 2000.